The METAR is a meteorological report giving the actual weather conditions at an aerodrome at designated intervals (every 30 minutes or hour). METAR is a system of codes. Every code consists data for a meteorological parameter. Yet, some sections may not be included in the METAR report as there may be no recorded data. Let’s take a look at these sections in the example below:

3. Date/Time of observation. First two digits indicate the calender day, and the rest show the hour (Zulu or UTC time)

b) If the wind is greater than 3 knots and the direction is varying by 60 degrees or more then the actual values must be recorded. A variable wind direction will be shown by VRB. VRB02KT would indicate that the wind was only 2 knots

It is 2000 metres in the given example, but the codes may vary depending on limits.

Current weather conditions are identified with the letter codes shown below. Light snow and mist are coded in the given example. 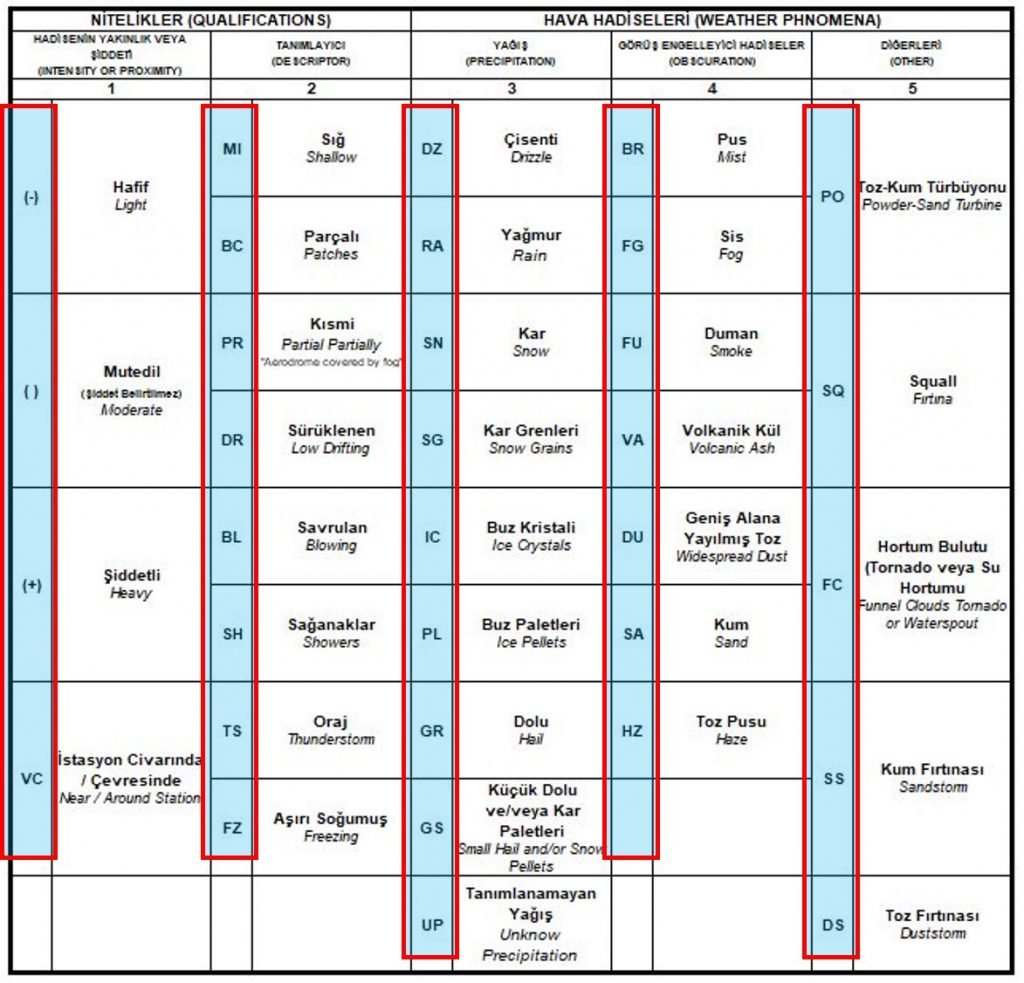 The visibility, cloud, and weather groups are replaved by the term CAVOK (cloud and visibility OK) when the following conditions exist simultaneously:

– Visibility is 10km or more

– No significant weather at or in the vicinity of the aerodrome.

If no cloud layers are observed and two conditions (Visibility is 10km or more, No significant weather at or in the vicinity of the aerodrome) for CAVOK are not present, SKC will be used.

When there are no clouds of operational significance to report, no CB or TCU and CAVOK is not appropriate, the abbreviation NSC (No Significant Cloud) is used.

8. Temperature and Dew Point are both measured in Centigrade. A minus value is preceded by the letter M. In our example, M05/M06 indicates that temperature is -5°C and dew point is -6°C

9. QNH: QNH indicates sea-level pressure with the value in whole millibars value and reported as a four figure group preceded by Q.

At RESN section, code RE indicates recent weather in the period since the last routine report but not at the time of observation (METAR). Code SN represents snow. 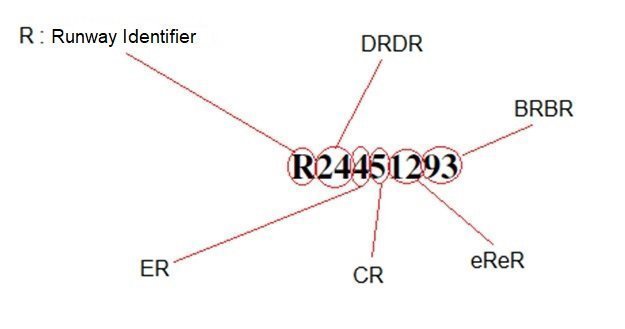 11. In this section, the weather conditions forecasted within the two hour period after the observation time are reported. In our example, it indicates that visibility will be 4000 meters after 2 hours.

A Terminal Aerodrome Forecast (TAF) is a concise statement of the expected meteorological conditions at an airport during a specified period (usually from 9 to 24 hours). It is established and issued in short message format by the relevant authority based on the meteorological conditions at an airport. The period in the report usually begins at least 8 hours after its release.

The period of validity should not be less than 6 hours, no more than 30 hours. TAFs valid for less than 12 hours should be issued every 3 hours and those valid for 12 to 30 hours every 6 hours. In addition, changes can be made in the report throughout the day if necessary.

FC or FT (represents TAF or Forecast) can be used together with country code in a TAF report issued for more than one aerodrome. For instance, FCUK stands for “Forecast United Kingdom”. While FC is used for short period TAFs, FT is used for longer ones.

The codes contain the following information and include any expected changes for one of these elements during the given period of time.